A Paddy Power branded soccer Jersey of the English Championship team Huddersfield Town was revealed after a sponsorship deal announcement. Soon after the reveal, politicians and sports fans went online to vilify the new uniform. Many had wondered if this was an elaborate stunt by Paddy Power. But, this was later on revealed as guerrilla marketing by the bookmaker.

The team’s classic blue and white stripes were covered with a Paddy Power logo. The Logo lay diagonally across the front of the English team’s jersey. Paddy Power went further and released a press statement expressing its delight over the new kit for Huddersfield.

In the same week, Huddersfield went to play a friendly match against Rochdale sporting the new uniform. Politician, Damian Collins, thought this uniform was inappropriate and called for the Football Association to investigate. The FA then announced that it had made contact with the Huddersfield requesting an explanation of the new uniform.

Paddy Power and Huddersfield later revealed the actual uniform that the team would be wearing in the coming season. The latest reveal of the uniform did not contain any branding. 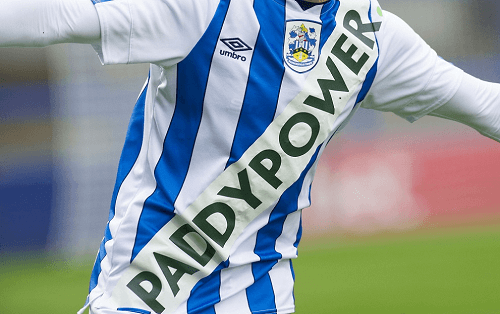 Soccer too Dependent on Gambling Money

The ambush marketing stunt by Paddy Power comes after many have been complaining that soccer in the United Kingdom is heavily reliant on gambling sponsorships. In the past season, more than half of the teams at the top were sponsored by bookmakers.

The Sportsbook also held other campaigns such as the “Save Our Shirt” campaign. This was a call to all the sponsors of soccer teams to stop tarnishing the branding of football shirts.

Throughout its campaigns, Paddy Power has sought to shock the public first and then make them think later. The bookmaker is still going to sponsor the English Championship team. However, there won’t be any bookmaker branding on it.