Reports are coming out amid Brisbane Broncos’ humiliating 58-0 finals loss to the Parramatta Eels. The NRL club’s officials are conducting an investigation into the what happened. It is alleged that senior Broncos players went out the night before the game to play pokies at Harpoon Harry’s in Sydney. While the players were not drinking, it is reported that the players left the hotel without the knowledge of coach Anthony Seibold. This is the Broncos’ record NRL finals loss and subsequently, put the team’s reputation into question.

Fox Sports Australia broke the story, outing several Broncos players in the process. Namely, the players that went to the pub until late on Saturday night include Andrew McCullough, Matt Gillett, Payne Haas, Anthony Milford, Corey Oates and, David Fifita. The former is said to have remained behind when his teammate left the premises around 11 pm. According to reports, David Fifita continued playing pokies machines. The club’s hierarchy and legends that have donned the Broncos jersey have lambasted the showing on-and-off the field. The coach cited lack of professionalism as the root course of the disregard for the team’s curfew. 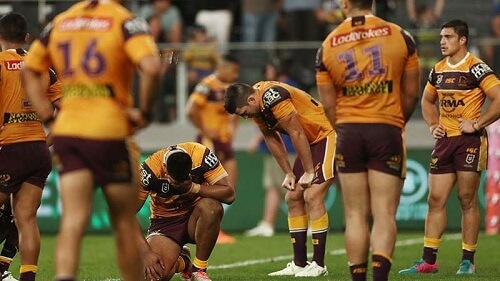 The team’s culture has been put into question after players fail to appreciate the importance of what is arguably the most important match of their season. presented at a team breakfast at 7am the next morning. In a statement released by the club, they explained that the players’ comings and goings are not supervised after their commitments to the club have been fulfilled. “Players aren’t confined to the team hotel on away trips once their team commitments including dinner, team meeting and sports massage have been completed”. The team will conduct a forensic assessment of what went wrong at Bankwest Stadium. Hopefully, the outcome will help avoid the calamitous ending to the season from happening in the future.