Visiting the world of Greek Gods has grown to be a favourite thing for many online pokie fanatics, and Quickspin Gaming has given New Zealand players one more chance to check out their powers. This time around, Greek Titans are the main focus in Titan Thunder, a classy looking pokie game online which added a sixth random reel, evokes god-like events and more exciting features. Read on below and learn all there is to know about the Titan Thunder online pokie. 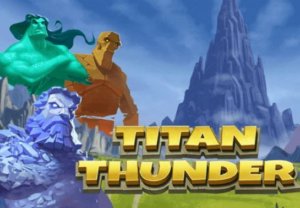 The casino game online is a five reel pokie with four rows and fifty paylines. The background features a jaded golden tablet floating in the air in front of meadows and moving clouds on top of a mountainous landscape. Five of the Titans represent the high-value symbols and come in different colors – blue, red, green, brown and light blue. Five colored gems represent the low-value symbols.

A big gold wild represents the Wild symbol, and a gold lightning strike represents the scatter symbol. The game has two distinctive bonus features, the Titans Free Spins and the Titan Thunder feature. The Titan Free Spins bonus may be triggered when a player manages to land three or more scatters across the reels. When that happens, the player is awarded eight free spins, and any wins that they make are subject to a x3 multiplier. An extra sixth reel is also activated during this round, only when two Titan symbols are chosen randomly as wilds.

The Titan Thunder feature is accompanied by a dramatic loud music, and there is no specified trigger to this round. It happens randomly. During the Titan Thunder feature, the sixth reel also appears randomly, and after that, a lightning bolt will appear and strike the reels. Whenever that happens, up to about eight wilds can appear across the reels, thereby increasing the player’s winning chances.

This game is quite a good balance of simplicity in exciting features and gameplay. Visit any of the Quickspin casinos we feature and start playing and enjoying that reel-spinning action while playing for real money!