Home » All Blacks Herding For Test Match with Japan

All Blacks Herding For Test Match with Japan

The All Blacks will be preparing for their 2019 World Cup Tournament by playing against Japan late next year. 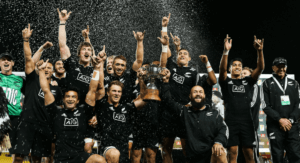 The CEO of New Zealand Rugby team confirmed to Newstalk ZB that the match is more like a test for the All Blacks and will certainly happen next year. The All Blacks will make use of this opportunity to familiarise themselves with the country. As the next World Cup will be held in Japan. The rugby team’s CEO further added that it’s a good strategy. This is because the players only have limited exposure to the country over the past few years.

All Blacks are set to play Japan on the 3rd of November 2018. And play three more games after that. They will be playing in Europe and one of the games will be against England. The venue is soon to be confirmed next year. This will be done as soon as more details about the 2019 World Cup are revealed.

In all honesty, the All Blacks would want to play against Japan in a city where the World Cup will be hosted. The rugby team has made it a routine to play the host nation of the world cup. Normally less than a year before the World Cup starts.

In 2006, they played two test matches in France where they were preparing for the 2006 World Cup Tournament. Three years ago, they played against England, 10 months before the 2015 World Cup in London.

All these test matches have allowed the New Zealand national Rugby team to replicate a mini World Cup scenario. The test match in Japan, followed by three more in Europe will be a challenge that is going to prepare them for the big tournament.

“The test matches won’t only be a great chance to prepare for the 2019 World Cup Tournament. But it will also give the All Blacks first-hand experience of playing in Japan a few months before the tournament”, said Steve Tew, the CEO of New Zealand Rugby.

We at Kiwi Casinos believe this is a great opportunity for the sports betters in New Zealand to start preparing their bets and wagers. 2018 test matches and the 2019 World Cup Tournament comprise of big games that NZ players can bet on. You may never know – the odds might be in your favour.