Talk about a lucky break! Rosa Dominguez, an American teenager, has won the Californian lottery not just once but twice in the same week! 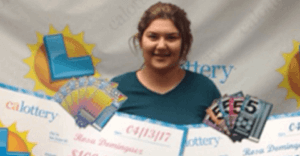 Miss Dominguez was on her way to her house when she stopped at a Service Station at Paso Robles, in California. Out of the blue, she decided to try her luck by buying a US$5 scratch card. The nineteen-year-old girl promptly hit the jackpot, with a prize of US$555 555. She told the California lottery that she was extremely nervous, happy and wanted to cry all at the same time.

However, she wasn’t done yet. The heartening part about this is that money couldn’t change the nineteen-year-old. Instead of her running to the Gucci store for that Gucci handbag, stunt around Rihanna, she went back to the same service station and got more scratch cards. This time around, Lady Luck was on her side as she whooped a six-figure amount of US$100 000.

A Casino Lottery Player Wins Twice In a Day

Just when we thought Rosa Dominguez is the luckiest lotto winner of all times, there’s more. In 2015, Rodney Meadows, another casino lottery player hit the jackpot 20 times Rosa’s scoop. To add on, he made two wins in one day.

Mr Meadows purchased a US$30 Californian lottery scratch card from a local store and won US$1 000. However, Meadows decided to wing it, and he bought three more scratch cards. These were the last three in the store, and one of the cards netted Meadows with US$10 million!

That’s the magic in casino gambling scratch cards; some do it twice a week, some twice a month. We urge players in New Zealand to register at any of the online casinos that are featured on our site and stand a chance to win huge today. You may never know – the odds may be in your favour!