The Possible Sell of SkyCity Darwin

Hotel and casino operator in New Zealand, SkyCity Entertainment, might be selling its gambling portion of Skycity Darwin resort. According to media reports, the group’s primary aim for doing this is to revive its gambling struggling businesses. 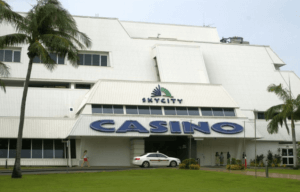 Skycity Darwin is situated in the northern territory of Australia. The resort includes a 5-star hotel, land-based casino that offers various casino gambling games and different entertainment as well as accommodation options. Skycity bought this property from MGM, a United Stated – based casino gambling operator back in 2014. It was worth a total of about NZD$195 million.

The current owner of the resort saw a drastic fall in profits from the casino department from the time it was purchased. The media reported that Skycity recognised how its Darwin casino was underperforming even after they increased the number of poker machines.

In one of the meetings with shareholders, the CEO of Skycity, Graeme Stephens revealed that Darwin casino had a challenging fiscal year this past year and one of the reasons is the increased number of poker machines in the northern territory.  Mr Stephens was appointed as Skycity Darwin’s CEO last year in November as he resumed his role this year in May.

It is known that Darwin casino features fantastic facilities however the casino is seeking a business for further developments. According to most media reports, they are even deciding to sell the casino portion if it can assist the casinos struggling operations.

More so, Skycity announced that they would be conducting reviews of the best possible option that they have for creating a better shareholder value. We will do our best to keep online casino players in New Zealand updated on this matter.