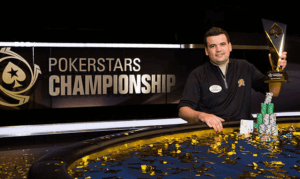 Raffaele Sorrentino collected €466,714 for his career’s best achievement. The player beat a 727-strong field to become the champion of the first PokerStars Championship to take place on European soil.

Raffaele entered final day play as one of the players with the biggest stacks. As the day progressed, the Italian only improved his position, winning most, if not all, of the most important posts.

Frenchman Michael Kolkowicz was the finalist to start Day 6 of the NZ$8367.85 buy-in event as the chip leader with around 4.6 million. It did not take long before the player doubled his stack. The play unfolded in his favour and he kept his lead for over four hours. Eventually, Kolkowicz ran into Sorrentino to bust in 5th place.

Despite the fact that Sorrentino had a massive advantage over his final opponent, heads-up was not a child’s play. The Italian needed 20 hands to finish off his German rival. It is also important to note that the two players had struck a deal before the beginning of their final duel.

Talking to interviewers, Sorrentino said after his triumph that he had finally fulfilled his dream. Born in Italy, the player has spent the past several years on the road in constant pursuit of quality poker action.

Prior to joining the PokerStars Championship Monte Carlo Main Event’s field, the player had taken part in a poker festival in Mexico. He had flown 12 hours across the globe to arrive on time for the historic PokerStars event.

We at Kiwi Casinos believe our New Zealanders can make their dreams come true just by playing one game. Check out the online casinos we feature on our site, register and start playing today. You may never know – the odds might be in your favour!