On Monday, PokerStars announced its new collaboration with the world’s fastest man, Usain Bolt. In celebration of the famous athlete’s career, PokerStars has created a new branded product that bears the sports celebrity’s name. 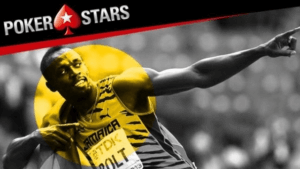 Online Casino players at PokerStars will now be able to play the amazing edition of the ‘Zoom’ poker game at the Usain Bolt branded tables. Zoom poker is one of the most loved poker games amongst PokerStars gamblers. During the gameplay, gamblers will be able to see their opponents changing after each hand.

The famous sports celebrity took a hike from his athletics career at the World Championships that occurred in London from the 4th of August 2017 to the 13th of August 2017.

As a result of his numerous achievements during his sporting career, Usain Bolt is considered to be the fastest sprinter of our time, worldwide.  The Jamaican athlete is the reigning champion of the Olympics in the 4x100m relay, 100m race, 200m race and also boasts many other medals that he achieved from the world’s most prominent competitions.

Now that he has retired from athletics, he will be able to focus of one of his passions in life – Poker. Earlier this year, PokerStars announced that Bolt will be joining a team of other sports stars working with the brand.

PokerStars reported to the media that since they have now completed the rebranding, they are now open to pursuing acquisition and merger opportunities. More so, they mentioned that they will be looking for suitable online casinos and sports betting partners to assist in improving performance.