PartyPoker – an online casino operator has confirmed that it will be leaving the Australian online gaming market. This was announced soon after the Australia Senate approved the bill that restricts the operation of unlicensed iGaming services to Australian players.

The online poker brand made the announcement on its official blog post that they will no longer be accepting Aussie players as of 31 August 2017. More so, they also notified AU gamblers that their funds are still safe and will remain safe until they want to withdraw them whenever they find it fit.

What PartyPoker has to say

The managing director of PartyPoker, Tom Waters mentioned that they are saddened to leave the Australian market as it was one of their biggest markets. However, he further said that they would continue to work with the AOPA (Australian Online Poker Alliance). The alliance hopes to convince the Australian government to spare online poker from the overall prohibition.

The online casino operator is the first major online casino gambling brand to exit the Aussie market after the bill was made law on the 9th of August 2017. A couple of days after the Senate approved the IGA bill, PokerStars and another big online casino operator announced that they will also be officially departing from the casino market in mid-September. Both companies are yet to confirm the exact dates of their exit. 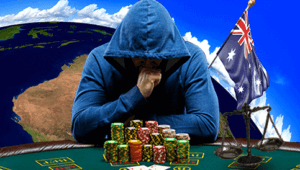 In the meantime, the IGA bill received a Royal Accent. This means that the bill is ready to take its effect as law. The bill was introduced late last year by Alan Tudge, the Human Services minister in Australia.

The legislative bill basically restricts online poker and online casino gaming to be offered to Australian players, unless the online gambling operators are not licensed in Australia.

Nonetheless, Australia doesn’t have a transparent system to issue online gaming licenses. In other words, there is currently no legal option for international online operators to offer their services to gamblers in Australia.