On Monday, USA’s premier stock-car racing circuit, NASCAR announced that they would allow teams to promote gambling and sports betting operators on their cars and uniform. However, this only included the states where sports betting is legal. There are only three tracks which are eligible. According to a reliable source, the race operator is also searching for a data deal league-wise. Fans can prepare to see their favourite athletes wearing uniform which feature sports betting when watching NBA, NFL and MLB games. Read on for more. 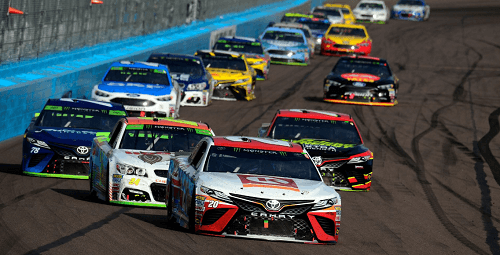 NASCAR is not taking it slow at all. The company is literally racing to greener pastures. As we speak, NASCAR is in search of one major sponsorship partner. The company is already in talks with sports betting companies. With that said, this kind of the deal is a first in the United States. NBC and Fox which currently air races by NASCAR have agreed to cover the sponsorships. However, because of legal issues over advertising in states where sports betting is illegal, sports betting sponsors will be restricted from added exposure. This includes in-car coverage.

The move is a big one for NASCAR, as the company has been struggling with attracting viewers and all-round interest. So, this is a creative way for NASCAR races to reach a new audience and to re-invigorate sports.

“It could add a new element of excitement — whether it’s wagering on who’s going to win or who’ll win the first segment or a one-on-one bet, just like in golf, where it might be Bubba Watson against Tiger Woods,” said NASCAR officials.

Dale Earnhardt Jr, who’s one of the drivers that have been in NASCAR for years expressed that he thinks “it would create more excitement, bring more attention, more people in attendance,”

“I can see it having a ton of positives,” added Earnhardt Jr.

Keep it locked to our casino site for more gambling news and updates!