Melbourne Victory has scored a front-of-shirt sponsor for the AFC Champions League, that is; with a media agency which is based in Hong Kong, Kaishi Entertainment. The club announced the news earlier today, but the cheering did not last long. The club had to ditch the deal soon after the announcement fearful of the company’s alleged links with offshore gambling companies. Read on for more. 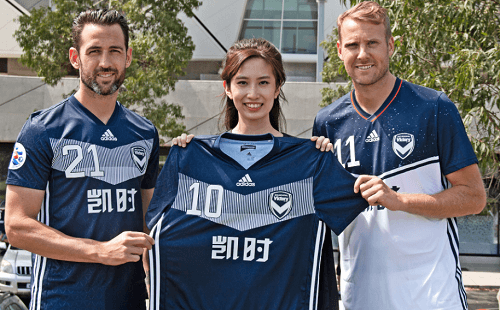 Ahead of their first ACL match against Daegu FC on Tuesday, Victory announced the deal and shortly made another announcement saying that they would be putting the deal on hold. This is after fans took to Twitter to say that they have noticed that the same woman who is believed to be Kaishi Entertainment’s general manager, Ying Jin Chen, looked familiar to one in a photo promoting KashBet, an offshore gambling company. The club, fans and journalist discovered other links the company has to KashBet after further searches, including a stock image purporting to be the company’s chairman.

”While appropriate due diligence was undertaken prior to the announcement and the AFC approved Kaishi, since that time further information has come to light which raises concerns about Kaishi’s link to an online betting agency, which the club takes very seriously,” said Victory in a statement.

”While Kaishi has represented (and continues to represent) to the club that it is not linked in any way with betting, given this new information, Melbourne Victory has made the decision to wear a clean strip this evening in their match against Daegu FC…we will then work with Kaishi to resolve any concerns we have ahead of our next AFC Champions League clash,” the statement continued to read.

The Damage the Deal Could Cost

Although the organiser of the tournament, the Asian Football Confederation has cleared the sponsorship, it also forbids gambling sponsors. Hence, the club opted to freeze the deal which could lead to a possible breach of AFC regulations and tarnish their reputation.

”It is important to note that Melbourne Victory has not and would not actively enter into an agreement with a company in the gambling industry. The club respects and adheres to AFC apparel requirements and the brand and integrity of our existing partners,” said Victory. ”The AFC and FFA have been kept informed on the matter, and we thank them for their support,” the team concluded.

Melbourne Victory will be competing with Daegy FC in away shirts and home shorts and socks. Meanwhile, Lawrence Thomas’ green goalkeeper shirt will have a sticky green tape covering Kaishi’s insignia.

Stay tuned to our casino site for more gambling news!