On Tuesday, the 15th of January, the central Indian state police raided an illegal cockfight gambling operation in Betul after they received a tipoff. However, the bettors and the organisers that were present managed to escape, and this left the police with nothing substantial to show for all their efforts. 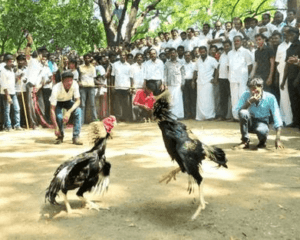 The police only managed to arrest two roosters that were forgotten behind by the owners during the escape. Local villagers quickly gave out the owners’ names to the police. The owners and they were taken to court on Thursday, 18Th of January 2018.  They were fined with a whopping INR 1 000 (NZ$15.65) after they plead guilty.

Though the two roosters were to appear in the court of law, together with their owners, they seem to have absconded further punishment because of their absence. This, however, may depend on how mad the owners were after being publicly shamed at the court.

On the 12th of January 2018, the Supreme Court of India dismissed an appeal that a lower court had ruled and they sustained the prohibition of cockfighting. Regardless of this ruling, the week has seen too much of illegitimate cockfighting battles across India, linking to the three-day harvest festival of Sankrati. So far, nearly 2 000 people have been charged with illegal cockfighting battles and betting offences.

Recently, the Indian media reported that even local politicians were attending the cockfight battles, irrespective of it being illegal. Like the MD (managing director) of Human Society recently said, any practice that exalts a lot of illegal activities must not have a place in the civilized society.

The police attempt to continue discouraging this betting activity by threatening to prosecute both the landowners and the organizers of the cockfight battles. However, these constraints have so far proved to be ineffective.