Home » David Baazov Trial Extended Until The 16th Of April

David Baazov Trial Extended Until The 16th Of April

Leading online casino operator, Amaya Gaming’s previous CEO, David Baazov just had his case with the judicial destiny pushed back to the 16th of April. The case is based on insider trading. 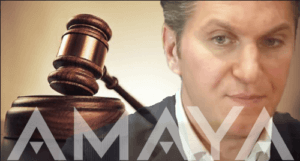 On the 21st of February 2018, La Presse made a report that the Quebec court has postponed the beginning of David Baazov’s trial date to the 16TH of April. The trial was supposed to have commenced on the 26TH OF February, but Baazov’s legal team made a request to be given more time to look into the evidence from Crown against Baazov.

Baazov’s longtime adviser – Yoel Altman and his fellow executive, Benjamin Ahdoot were all accused with about 23 charges of insider trading sometime in March, two years back. The three gentlemen stand accused of unlawfully making themselves benefit as well as other individuals through partaking in online casino transactions that were related to most of the unannounced stock transaction of Amaya Gaming. This also included PokerStars, the parent company for Amaya Gaming.

Originally, the trial was meant to start sometime in December, but it had to be postponed so that the judge could also consider Baazov’s legal team and their motion that the charges can stay because of the period of time it will take for Baazov to make it to trial. More so, Baazov’s lawyers also challenged the AMF’s delays when it came to disclosing the evidence that they intended to use against their client, Baazov.

The decision to have the trial postponed seems to be carefully directed to the concerns that the legal team had. Baazov’s spokesman reported to La Presse and mentioned how they are still examining the evidence that was brought forward against Baazov. In the event that the trial starts at the expected date, the process might take about 70 days all together as they will be moving at a pace of four days in a week.

Baazov stepped down as the online casino company’s CEO sometime in August 2016. He then sold off his whole lot of shares after he failed to buy the company and make it his own. Amaya, however, rebranded itself to The Starts Group in June 2017.