Travel all the way to Asia where you will meet a floating and magical panda that will reward you generously in the latest Dalai Panda pokie online. The new casino game will no doubt make an great impression at first glance, all thanks to its unique reel-spinning action. 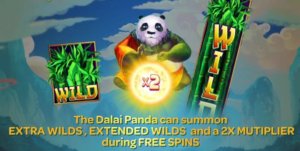 Dalai Panda boasts exclusive graphics which is only an added bonus when compared to other panda-themed online pokie games. Kiwi players will also be treated to soft and gentle oriental music whose volume increases every time they trigger a winning combination.

The new Dalai Panda online pokie from iSoftBet consists of two sets of reels, each with three rows and three reels, along with 27 paylines. The magical floating panda is located in the center of the two reel sets, hovering over the ‘Free Spins’ bank. New Zealand players will be spoilt with plenty of intriguing bonuses such as the wild symbol, multipliers, free spins, as well as a 500 coin jackpot prize up for grabs!

The green lush bamboo tree acts as the wild symbol, and it can replace all the other symbols so as to create a winning combination, apart from the bonus symbol. Kiwi players should know that in this game, the wild symbol will not appear on the reels but rather the Dalai Panda will randomly award the players with two to four wild symbols that will be scattered across the screen.

The yin-yang symbol represents the bonus symbol and Kiwis will need to land three yin-yang symbols between the two sets of reels for them to trigger the free spins feature. To add icing on the cake, NZ players can also win up to 1 000 coins when they manage to land six bonus symbols. Once they trigger the ‘Free Spins’ feature, the panda will combine the two reels, creating one set of reels with 729 paylines.

Dalai Panda boasts a return-to-player ratio of 96% and was released by iSoftBet this October 2018. Visit any of the iSoftBet Casinos we feature and start gambling for real money today!