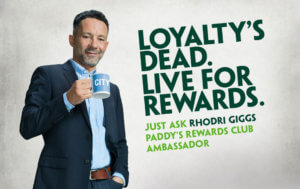 The Story Behind Paddy Power Ad

Before we pre-empt the Paddy Power rewards ad, let’s give you the background story. Two brothers born to a former rugby star and his wife grow up to both love football. The older brother who is more assertive and social excels in his football career. He becomes a celebrated and decorated football star. The younger brother shows promise as a footballer and is drafted into football academies. However, he is not satisfied with is training and quits football altogether. He then pursues a career in real estate. All seems well until the older footballer brother decides to carry out a year’s long affair with his younger brother’s wife. Does this sound like a soap opera? They do say truth is stranger than fiction.

Why the Rhodri and Ryan Giggs Story for the Ad

The two brothers scandal first broke out in 2011. Now the wronged brother Rhodri says he has got over the issue and moved on. Which is why he finding the idea quite funny now that it is all water under the bridge. The Paddy Power spokesman was quoted “If you can’t trust your own brother to be loyal, why would you bother with a loyalty scheme?” The team at Paddy Power was inspired by Rhodri’s story to have a system of rewards not Loyalty. As the new ad goes “Loyalty is dead. Live for rewards.”