Suicide Squad from Playtech has made its way to one of the top casinos online available for New Zealand players. Kiwis can join the DC supervillain gang exclusively at Paddy Power Casino.  While most comic stories feature superheroes that are after the bad guys, occasionally even the evil doers get a chance to do something right once in a while. 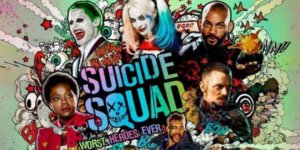 That’s the story behind this exciting pokie game – themed around the highly entertaining film that was released in 2016.  Read on below and learn all there is to know about Suicide Squad Pokie

The new pokie game features all five of the famous DC supervillains, just like in the movie. These include Harley Quinn, Katana, the joker, El Diablo and Deadshot (the symbol that pays the highest). The other symbols include Katana’s mask and sword, boomerangs, the Joker’s blade and Harley’s necklace and basketball.

With regards to placing bets, New Zealand players will be happy to know that the new game has a lot of flexible options that cater to both low and high rollers. Though the paylines are non-adjustable, there are about twenty different wagering options at every Kiwi player’s disposal. Players can start their reel-spinning action with as little as NZD$0.50 per spin, with the maximum being NZ$500 per spin.

What’s even more impressive is that the game comes with four whopping progressive jackpots. Any of the jackpot games are triggered randomly on any active reels. New Zealand players will have to select between twenty jackpot icons that match with one of the four mystery jackpot icons.

With an RTP ratio of 94%, Suicide Squad is definitely one of the most exciting pokie games online. For now, it’s only available at Paddy Power casino but will make its way to all Playtech casinos soon.