One of the world’s leading casino software providers has released yet another exciting pokie – Street Magic pokie. New Zealand players can look forward to fantastic gambling that will surely offer them the best casino gaming experience of their lives. 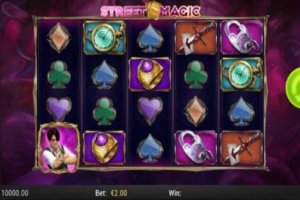 Illusionists and magicians usually get their start as street artists where they entertain a small crowd with exciting performances. Their performances often involve tricks so grand that members of the audience are confused, even if it has been performed right in front of their eyes. Now imagine playing a pokie game like that!

Besides the magical performances, New Zealand players can also trigger the ‘Free Spins’ bonus feature by landing three scatter symbols on reel 1, reel 3 and reel 5. Once the bonus round is activated, the magician will then shuffle the cards and present them to the player.

With quite a thrilling soundtrack, sleek sound effects and sophisticated animation, there’s no reason for Kiwi players not to try the exciting Street Magic pokie game from Play ‘N Go. Once it has been officially launched, we will let Kiwi players know so that they can give it a try at any of the Play ‘N Go casinos we feature.