Legendary boxer, Floyd Mayweather Jnr. made an announcement on Wednesday that he intends to join the fantasy sports betting industry in 2019. The retired fighter has had a string of business ventures that are outside combat sport such as gentlemen’s night club in Vegas as well as his boxing promotions company. This latest project will see him join Daily Number, a fantasy sports betting app alongside former Connor Kroll, both of whom have joined the company as equity partners. Another notable member with a stake in the company is co-founder and All-Pro NFL cornerback Richard Sherman. 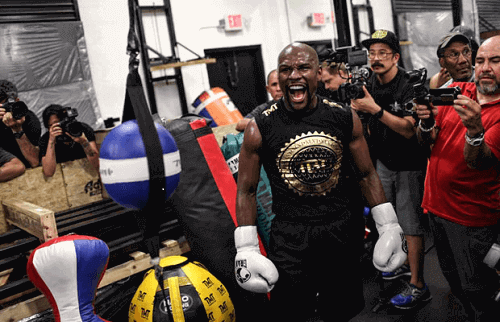 The promotion of the announcement showed the boxer training in his gym which hinted at a possible comeback into boxing. Last year, there were rumours that Mayweather would come out of retirement have a rematch with Manny Pacquiao. It wouldn’t be that far-fetched since the undefeated fighter did the same thing when he fought MMA star Conor McGregor in 2017. To the boxing purist’s disappointment, the announcement had nothing to do with boxing or a potential comeback. Fans took to social media to vent their frustration as they feel duped by the publicity stunt.

Will Floyd Have a Rematch with Manny Pacquiao?

Floyd was not dubbed Money for no reason. The fighter is unashamed by his love for money and is not shy about spending it either. The fight with Pacquiao generated approximately $600 million in which Floyd collected 10% of the return. It’s safe to say, if the check is good enough, Mayweather would step out of retirement one more time to get another nine-figure check. Just last year, Floyd boasted about fighting Japanese kickboxer Tenshin Nasukawa in a fight that took just 9 minutes. We are holding thumbs that he might just get bored with regular life and come back in the ring.

For the latest casino news and sports betting insight, keep it locked to casinous.com.