Make your way to the South-American rainforest where you will be handsomely rewarded by one of the most prominent goddesses while playing the new Jaguar Temple pokie. The game is powered by Thunderkick and come with exciting casino bonuses for New Zealand players. 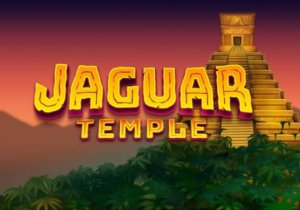 In the Inca culture, Jaguars are considered as the essential idol as their duty is to protect the Empire from evil spirits. They also represent strength. Thunderkick software provider found their way around this theme and created one of the most exciting casino games for NZ players. Read on below and learn all there is to know about this pokie game online.

Jaguar Temple is exquisitely portrayed across five reels with three rows and twenty paylines. Kiwi players will be awarded an assortment of attractive bonus features such as the Jaguar wild symbol, expanding wild symbols, scatter symbols, free spins and a whopping jackpot prize of up to NZD$5 000.

It shouldn’t be surprising that the Jaguar is the most significant symbol in this online pokie game. Depicted in solid gold, with pink jewels as its eyes, the Jaguar can land on the reels as a 1×1 symbols or a 3×3 symbol. The Jaguar symbol will only appear on reel 2, reel 3 and reel 4. The Inca Priest acts as the wild symbol and can stand in for all the other symbols in the game, apart from the scatter symbol. 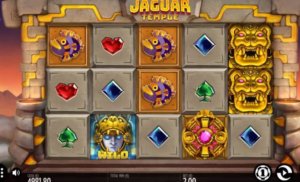 Though the latest Jaguar Temple pokie game doesn’t permit Kiwis to alter the twenty paylines, players still have a lot of flexibility with a wide range of wagering denominations. The game has 14 different betting denominations per spin and these range from NZD$0.10 to NZ$100 per spin.

This new online pokie game was released on the 19th of September 2018 and is available at all casinos powered by Thunderkick. With an RTP ratio of 96.1%, at Kiwi Casinos we recommend New Zealand gamblers to try this casino game; it will be well worth their time.