The United Kingdom bookmaker, William Hill, has grown its sports betting relations considerably with one of the regional casino operators – Golden Entertainment. 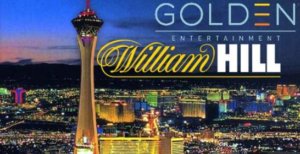 Of these three states, only Nevada permits sports betting. However, tempus fugit seems to be the mission statement for all casino gambling companies that are looking to operate in the rapidly expanding US market.

As for Montana and Maryland gambling aspirations, Golden Entertainment acquired ownership of Rocky Gap Casino in Maryland as part of one of its deals. Also, it has distributed gambling operations at about 300 locations in Montana.  Golden Entertainment’s CEO Steve Arcana reported to media that he looks forward to making use of William Hill’s ‘proven sportsbook’ to assist in growing its player base in Nevada as well as other jurisdictions.

The CEO of William Hill returned the compliment and commented to the media saying that they do have a great relationship with Golden Entertainment and as partners; they are both looking forward to nothing else but winning and being the best in the industry.