The French sports bettors have already set new wagering records on this year’s FIFA World Cup, yet the tournament is still far from being over. Arjel, the French casino gambling regulator recently published their statistics on local players that have been wagering on the Wold Cup in Russia. 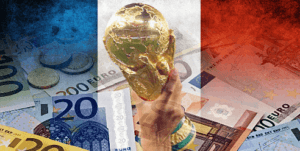 Over the group-stage matches that have happened between 14 June 2018 and 28 June 2018, French players have wagered a total of NZD$363 million. This is double of what was wagered on in the group stages of the 2014 World Cup tournament and more than the NZ$290 million that was wagered on the whole event.

The group-stage wagers for this year have also surpassed the NZ$297 million that was wagered during the entire UEFA European Championship tournaments. Of the total amount that has been wagered so far on this year’s World Cup in Russia, NZ$159 million was wagered at the Française des Jeux sports betting company.

The three FIFA World Cup matches where France was playing, understandably generated the most sports betting volume so far. About NZD$39 million has been wagered on only the three matches. This is about 11% of the overall group stage’s total handle.

Nonetheless, the Switzerland vs Brazil match that took place on the 17th of June 2018 claimed the highest betting volume. The total amount of money that the French wagered was approximately NZ$17 million. This amount is so far the second highest wagering amount on a single match since the French online betting market was legalized in 2010.

The hype around the 2018 FIFA World Cup has been getting better and better.  So far, the journey has been unpredictable with some of the best soccer players like Messi and Ronald going home. Keep it locked here at Kiwi Casinos for all the latest gambling news!